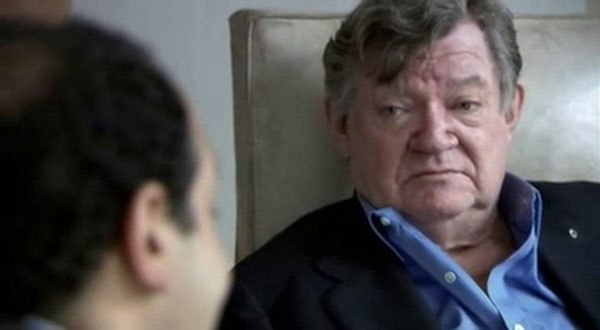 Robert Hughes described Warhol as ‘as one of the stupidest people I’d ever met in my life. Because he had nothing to say.’ Hughes was dismissive of much of modern art because, like many other old school aesthetes, he never managed to understand it.

And over the course of the ‘my life’ in question, Robert Hughes (1938-2012) established himself as perhaps the foremost art critic in the western world; a not insignificant achievement, though something of a let-down when you realise that he wasn’t exactly slugging it out with hundreds of other critical titans; and that other than the presence of his own lumbering hulk in the foreground, the pond he was waddling around in was almost empty. And the idea of Hughes as an ‘art interlocutor’ – interpreting all things artistic for those who don’t know what’s going on – is also considerably less than it seems, because if you stop to examine his torrents of confident non-sequiturs it soon becomes apparent that much of what he had to say was hardly ever about the art itself, but more about art’s place in culture and society. They are not one and the same.

Like Kenneth Clark (1903-1983) of the TV series ‘Civilisation’ before him – and this also applies to many other art critics – Hughes was able to declaim to a largely suppliant and respectful audience, as the vast majority of those who enjoy art are simply not in a position, either in terms of book knowledge, or breadth of artistic experience, to contradict a supposed expert. The art world itself may contain many genuine enthusiasts, but discussions of art in the media are not characterised either by a depth of understanding or by a depth of insight, any more than the world of religion is characterised by spirituality. There are obviously groups of well-informed people all over the place, but their ideas don’t shape public opinion, and so it is left to those with the self-belief enough to want to climb up on to the stage and tell the rest of us what art is all about.

The problem with art criticism in its current state is that there is a widespread belief – across the board – that, in the end, nobody really knows what art is, and so everyone is entitled to their own opinion. This means that establishing yourself as an authority on art is going to be about the strength of your performance, not the quality and consistency of your ideas. A critic basically needs to be able to declaim fluently and entertainingly; and Hughes of course had added value in being able to spice his brew with scathing judgements, thereby not only giving us a laugh, but also answering a need for surefootedness in an otherwise slippery and uncertain realm.

Hughes was also a physically big presence, and macho with it, and this must have given potential dissenters pause for reflection. And it’s hard not to experience his pronouncements as authoritative, despite the caveats that have been listed. Yet his art critical declarations are fatally undermined by the fact that most of the time he doesn’t seem to be interested in the art itself, but only in its cultural significance.  ‘The Shock of the New’ TV series is, according to Hughes, about modernity, and ‘modernism’, as reflected in modern art; but approaching art in this way doesn’t tell us about the art itself, and its intrinsic qualities, it only tells us about art’s relation to cultural history. If you want to know about an artwork ‘as art’, you want to know what, as a presentational object, it is revealing to you in its own unique way, and not its network of relationships in a wider cultural context.   There is of course a place for analysing such relationships, and an interesting one at that, but contextual analyses tell us nothing about the essence of the artworks themselves. To the extent that we approach art as a feature of cultural history we are not really engaging with art on its own terms at all but employing it as a launch pad for lines of thought of an entirely different order.

Why do critics like Hughes – John Berger is another – make this kind of absurdly simple categorical error ? Why do they confuse interpretative freewheeling on culture or society with the idea that they are talking about art ? Basically because they don’t have a clear idea as to what art is in the first place, and are not sure how to draw a clear distinction between art itself and the stuff that surrounds it, and so end up thinking that it’s probably amounts to the same thing.  It’s as if you were to confuse the sound of Hendrix’s music with ideas about his choice of clothes, and his girlfriends, and his stint in the army.

There is a telling moment in Hughes’s encounter with a Warhol collector, where Hughes, in an unusually confrontational mood, describes Warhol as ‘as one of the stupidest people I’d ever met in my life’, and when asked why, replies, ‘Because he had nothing to say.’  We can conclude from this that for an artist to be worthy of consideration, they must either be able to display classical dexterity; or, as exemplified by Paula Rego, be able to represent serious subjects. Failing that, they would have to be able to give a good account of themselves, justifying why their less than classical tomfoolery should be given legroom.

This is the idea of ‘art’ as equivalent to classical aesthetics, in which an artist is expected to master hard won academic techniques, and then put them to the service of creations which are not only manifestly skilful, but which also depict subjects which are traditionally ‘profound’, even if they amount to no more than vases of flowers or bowls of grapes.  Words such as ‘beautiful’ and ‘sublime’ and ‘ravishing’ are the requisite descriptive tools here, because we are talking about creations which have obvious ‘aesthetic value’ by conservative standards; and insofar as artworks situate themselves within classical parameters, they also call for for classical modes of interpretation, derived from scholarly art history.

The problem is that authentic modern art – of which Warhol is unarguably one of the greatest practitioners, even if you don’t much care for his work – operates according to non-aesthetic narrative principles, and is therefore headed in a quite different direction from the quest for classical, museum-quality ‘beauty’. Modern art is about connecting with the experiential landscapes which some artists are able to conjure up through their artworks, and this connectivity functions according to theatrical and narrative principles rather than aesthetic ones. Modern artists are revealing to the viewer worlds they have discovered, and then, using their artworks and artforms, inviting you to experience them as your own. A Warhol ‘Marilyn’ is not an ersatz Velasquez  – even if Andy thought it was, and wanted it to be: a ‘Marilyn’ – like any or all of his other works – is an invitation to a theatrical extravaganza of transgendered and drug-addled camp nihilism, spiked with glitz and glamour and celebrity, and dialogue reduced to a cultivated vacuity. This performative inversion of normative values – Warhol’s real theatrical ‘art’, in words, pictures and behaviour – is quite other than the kind of cognitive deficiency Hughes though he was dealing with. Truth be told it is Hughes who turned out to the stupid one, wholly unable to recognise the transgressive artistry all around him, and wholly unable to make the transition from an orthodox classicism – the type of lumpen conception of pictorial art any bonehead can come up with –  to the new world order.

[More articles on this conception of art here]