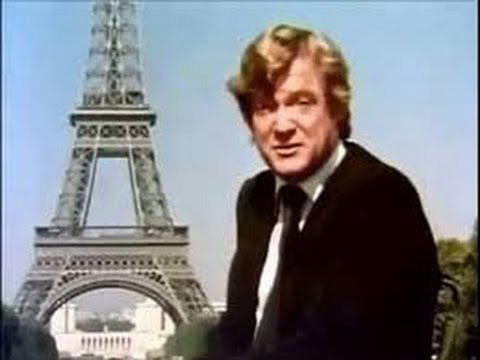 This is a transcript of Hughes’s conclusion to his televisual survey of modern art (The Shock of the New), and the last words to camera in Episode 8 ‘The Future That Was [End of Modernity]’. It is worth quoting in full:

“We finish where modernism began, at the foot of the Eiffel Tower. Perhaps the etiquette now demands that I should try and prognosticate about what is coming next. Well, I won’t, because I don’t know. History teaches us a certain thing, that critics, when they fish out the crystal ball and guess what the future will be, are almost invariably wrong. I don’t think there’s been such a rush towards insignificance in the name of the historic or future as we’ve seen in the last 15 years. The famous radicalism of ’60s and ’70s art turns out to have been a kind of dumb show, a charade of toughness, a way of avoiding feeling. I don’t think we are ever again obliged to look at a plywood box or a row of bricks or a videotape of some twit from the University of Central Paranoia sticking pins in himself and think, “This is the real thing. “This is the necessary art of our time. This needs respect.” Because it isn’t, and it doesn’t. And nobody cares. The fact is that anyone EXCEPT a child can make such things, because children have the kind of direct, sensuous and complex relationship with the world around them that modernism in its declining years was trying to deny. That relationship is the lost paradise that art wants to give back to us. Not as children, but as adults. It’s what the modern and the old have in common – Pollock with Turner, Matisse with Rubens or Braque with Poussin. The basic project of art is always to make the world whole and comprehensible, to restore it to us in all its glory and its occasional nastiness not through argument, but through feeling. And then to close the gap between you and everything that is not you, and in this way, to pass from feeling to meaning. It’s not something that committees can do. It’s not a task achieved by groups or by movements. It’s done by individuals, each person mediating in some way between a sense of history and an experience of the world. This task is, literally, endless. So although we don’t have an avant-garde any more, we’re always going to have art.”


Hughes was in his early 40s when he spoke these words, and whether or not he later came to a different understanding of art, we can analyse it as an interesting overview in itself. Some might say that this is unfair, in that it places excessive weight on what was probably just a sequence of throwaway lines, none of them particularly well thought through; and that the weight of his artistic perspicacity – such as it is – is contained in the preceding programmes, not in some fluffy coda. But the problem with critical indulgence like this is that it doesn’t really value clarity of thought in ‘explanations of art’, and is prepared to forgive all kinds of intellectual shortcomings in the name of a good performance. Hughes is unquestionably good value as a talking head, but much of what he had to say doesn’t bear close analysis, as he was more interested in dazzling the listener than in presenting a coherent position. And the default position seems to be that, when it comes to ‘art’, you don’t really have to know what you’re talking about: you just have to be entertaining; no one is paying much attention to the words, they’re focussed on the pictures.

So Hughes saw modern art as no more than a ‘dumb show’ put on by ‘twits’. And these twits were ‘denying’ the cosmic feelings required to return us to the ‘lost paradise’ of wholeness and comprehensibility; and they were doing this in the ‘declining years’ of modern art, though it’s not clear why Hughes specifies that period. The basic project of art, according to Hughes, is always to ‘make the world whole and comprehensible, to restore it to us in all its glory and its occasional nastiness not through argument, but through feeling.’ Presumably we lost our glorious connectivity by thinking too hard (‘argument’ in Hughes’s terms), though once the glory is restored, we can ‘close the gap’ between ourselves and everything that is not ourselves, and in so doing ‘pass from feeling to meaning’. And this is done not by ‘committees’ but by ‘individuals’, ‘each person mediating in some way between a sense of history and an experience of the world.’ And the task of closing the gap and returning ourselves from feeling to meaning is, ‘literally, endless’.

Naturally enough, this kind of intellectual swamification doesn’t respond particularly well to systematic analysis, and we should probably treat it as one would other examples of swami-speak, and politely disregard it as sentimental piffle. What Hughes is saying in effect is that reverential contemplation of the works of the old masters –  that is, swooning rapturously in front of those overwhelmingly dull gilt-framed museum paintings – is where the ‘real thing’ is to be found, and that the old master are paradoxically, the ‘necessary art of our time’. And in all this Hughes is articulating as definitive a statement of orthodox art mysticism as one is likely to find anywhere, given that most supposedly philosophical declarations on art tend to be very vague, and tentative, and uncontroversial. In addition, Hughes is also reassuring us that artistic authenticiy lies in the good old ways of classical technique and traditional form, and traditionally endorsed subject matter.

We are dealing with at least two things here: firstly ‘art mysticism’, meaning a conception of art that spills over into states of comforting self-validation; and secondly a simple form of ‘life coaching’, in which art is believed to offer its practitioners a philosophy of life and action. Both forms of ‘inner perception’ involve calling up reassuring moods and reassuring frames of mind, which the experiencing subject turns to for guidance. In this way art is made to resemble – for those who deploy their ideas in this fashion – a type of faith, or religious belief. And in the case of Hughes, his faith is firmly grounded in a reverence for the classical tradition.

What Hughes couldn’t comprehend is that modern art has something of its own to say. Modern art could only be judged as a dumb charade if you had no idea what it was up to, and Hughes clearly didn’t. Modern art was about introducing a new narrative form, based in theatrical principles, whereby art objects could come to be seen as static elements – props, if you like – in the creation of imaginary stage sets, laid out over many locations, and occasionally even in many countries. Warhol, and Beuys, and even Jeff Koons were setting up ‘environments’ and decorated ‘spaces’ which contained their own artist-specific narratives; sometimes involving direct performances by the artist themselves, as in the case of Beuys and Warhol; and sometimes only implying narrative, as in the case of Gregor Schneider or Jeff Koons. Modern artworks are not standalone attempts at classical beauty – though they can be that as well –  they are essentially props in the display of subtle narrative environments; and once you pick up on that, the physical artworks explain themselves.

For example, the ‘art’ of Joseph Beuys is his ‘art-theatrical life’, not the cumulative aesthetic detail of his individual artworks which, in classical fine art terms, make no sense at all. Most of what Beuys exhibited as art could easily be dismissed as junk, but only if you were unable to grasp its theatrical value.

In the same way, Duchamp’s urinal may have started out as a Dadaist prank, but it became, in time, and when situated in context of his other artworks, a symptom of Duchamp’s ‘art mentality’: that is to say, the particular angle, or perspective, on presentational objects that he wanted to promote. On its own, the urinal is just an absurdist conversation piece; but in the context of Duchamp’s other artworks – like the hat rack, bottle rack, snow shovel, bicycle wheel –  it is clearly representative of Duchamp’s strange dislocated, cold, vaguely sadistic sensibility, and his own distinctive artistic take on life. And if you leaf through a book of Duchamp’s art, a distant ‘narrative’ starts to emerge from the onrush of images, though this is not a sequential plot-driven narrative of the type you find in the cinema – it is an artistic narrative, indeterminate and haunting – exactly like the meaning afforded one by a good film – and unique to the presentational possibilities inherent in modern art.

Why couldn’t Hughes get any of this ? Probably because he was unable to see beyond the distorting prison of traditional aesthetics, which reduces everything to a monotonous obsession with ‘beauty’. Classicism likes to think of itself as the last word in culture and refinement, but behind its ornate exterior it is straightforwardly shallow and one-dimensional. It encourages professional aesthetes   to think of themselves as super-sensitives, with all their capacities refined to a high camp tizzy, but in practice they’re very often the least perceptive, and the most intellectually inept.