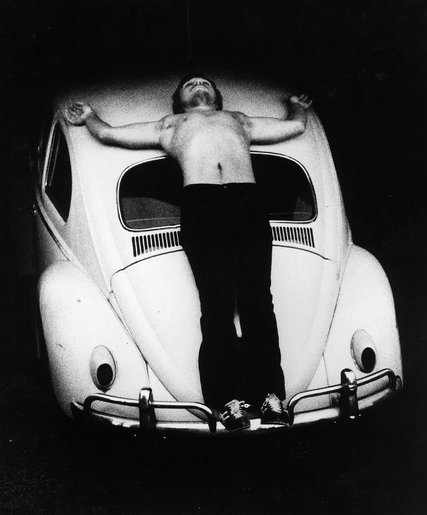 Many of the talking heads interviewed in this film give little mirthless chuckles as they discuss Burden’s early work, as if they’re still not really sure what he was up to. They’re telling us the whole thing might, in the end, turn out to have been no more than a joke. Burden also appears ambivalent about his own efforts in the sense that, although he doesn’t giggle when explaining a piece, he often opts for banal, non-artistic explanations – the sort of boilerplate anyone might come up with – thereby undermining the cogency of the actions themselves. The documentary also gives the impression – possibly unintended – of wanting to consign Burden’s performances to an early phase in his career, thereby encouraging us to view the performances as student ‘experimentation’ – itself a subsection of vacuous tomfoolery – rather than as anything more serious.

Performance art is a highly specialised form of theatre which, rather than relying wholly on character-based and plot-driven linear narrative – with its dependence on tensions and resolutions within conventional parameters – opts instead for orchestrating lesser-known and more demanding elements of theatricality, as a means of exploring alternative narrative possibilities. And although the chosen elements of an art ‘performance’ may appear to be unusual and startling, they are in reality no less rigidly theatrical and narrational than those which constitute a more conventional staging.  In other words, though the content of an art performance may appear to be bizarre to the point of unintelligibility, it will still conform, in every way, to the paradigm of a theatrical presentation; that is, it will begin with the establishing of a theatrical pretence, followed by an identifiable time-limited action. A performance can only be said to begin when the relationship between performer and audience has been formally established (the pretence); and then the action must proceed, through the presentation of content, to an identifiable ending.

All of which means that a performance artist is, in formal terms, no more mysterious or bizarre or unwarranted than any other conventional actor. The plays they put on might be narratively challenging, and their choice of theatrical space wildly eccentric, but the actions themselves are ‘plays’ of a sort none the less, whether consisting of a single image lasting a millisecond, or involving disconnected events going on for days.

It’s apparent from the uneasiness of the talking heads in this documentary – artists and commentators alike – that performance art is still conceived of as some sort of aberrant, and possibly vacuous, ‘gesturing’, wholly unrelated to the world of classical painting and sculpture, and therefore having no legitimate claim to be ‘art’ at all. Real artists ‘paint’ and ‘sculpt’; only clowns and students ‘perform’.

So Burden’s problem lay in the fact that he was operating in a world that to this day still doesn’t really know what he was on about, and still doesn’t know how to present his work without making it look faintly absurd. Oddly enough, Burden comes off well – at least in the clips shown – in a important interview with Regis Philbin, in which Philbin (perfectly understandably, given his remit) tries to encourage Burden to portray himself as weird and deranged; and in which Burden answers questions straightforwardly and unapologetically, yet without the conceptual armoury required to put paid to the idea that his work was borderline buffoonery. If Burden had argued that he was essentially a theatrical performer, using challenging imagery as a means of access to unusual realms of experience, performance art might today be given its due.